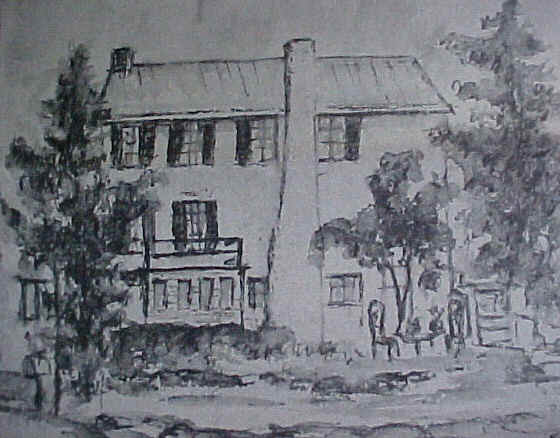 "Hillsdale" the home of Freda J. Wood (Mrs Morris M) on the corner of Creek and Hillsdale roads in East Bradford Township, was built by Nathan Sellers in 1830 for his daughter, Hannah Hill of Lenni.

Coleman Sellers, Hannah's brother and her trustee, lived at 10 N. 6th Street, Philaelphia.  His wife, Sophonisba, was the daughter of Charles Wilson Peale, the famous artist.

The Hillsdale area is part of the 1,350 acres Penn granted to John Tovey in 1681.  In 1702 Abiah Taylor bought 430 acres of this grant and his grandson John inherited the small grist mill and log house with the 90 acres Nathan Sellers purchased from him in 1820.  Sellers was a member of a prominent Delaware County family with mills in Cardington.

Sellers also built a larger mill and 2 rows of tenament houses which made the area into a sizable village.  It became known as Hillsdale after his daughter.

Thus Sellers provided her with a goodly income property,  It wa often leased over the years to be used not only to manufacture cotton, as originally intended, but paper and other items as well.

The last operating owner of that mill was William Bowers, who purchased it in 1862 to run aw a paper mill.  He was one of a Philadelphia family of paper makers.

During those years there were 3 dams on the Brandywine which gave power to the mill.   And there were and are 2 islands.  These are now called the Paper Mill Islands.  They are famous for the many Brandywine blue bells that bloom there in late April or early May.

Hillsdale was also the home of a sly old fox known far and wide as Susie Paper Mill.

Mrs. Wood's home is built of stone covered with whitewashed mortar.  With its red roof it makes a striking note nestled among many trees.

The outside chimney was added to the house y Henry collison 10 years before th eWoods bought it.  Collison also restored the house which had been badly neglected.  Previously there had been no fireplaces as various rooms were heated by coal stoves.